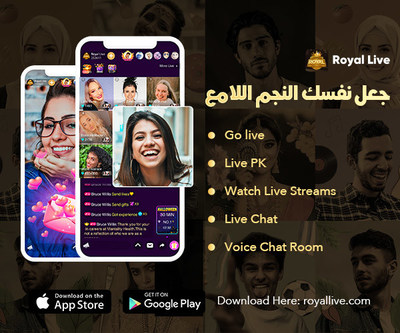 Royal Live’s new «League» function marks a new phase in the company’s quest to reward dedicated live streamers. «League» will allow users to invite and connect with more friends, upgrade to higher levels quicker, and access exclusive rewards of in-app gifts and special effects. By using «League», Royal Live’s ‘shiniest stars’ will earn the chance to win exclusive privileges, including virtual gold coins, diamond gifts, and other add-ons which can be used to enhance the broadcaster’s channel – making them more attractive to prospective viewers.

Launched in July this year, Royal Live has already positioned itself as a leading platform in the global live streaming market, offering broadcasters something different among Middle Eastern countries. The gold-and-black design presents a mature aesthetic which reflects the traditional culture of local ethnic communities, along with a tailored design for in-app gifts of castles and camels, brings even more enjoyment when exploring the new feature.

The App has distinguished itself from the competition with a number of innovative features such as ‘Live PK’ – a fun broadcaster challenger setting – its ‘Voice Chat Room,’ which facilitates fun voice chats, karaoke and even language learning with new friends, in addition to ‘League’. The platform also regularly launches exciting experiences such as ‘Me and Royal Live,’ ‘Star Making Plan’ and ‘Football Quizzes’, which have helped attract over 50 million users to the App.

But Royal Live’s uniqueness goes far beyond fun and innovative functions. The platform is also committed to building an ecosystem that sources and invests in the best broadcasting talent. Since its inception, Royal Live has worked with a number of local anchors and management companies, particularly from the Middle East, to recruit the region’s very best talent to its network. The Middle East is an area of diverse and rich culture, and Royal Live hopes to share their unique stories with its millions of users across the world.

With this in mind, the platform recently has launched a new business development plan to collaborate with local agencies with exciting and engaging hosts, offering contracts worth up to US $200 per month for successful candidates.

With the launch of its new «League» function, and its commitment to finding the best broadcasting talent, Royal Live expects to see user growth expand even further in the future.

For business collaboration, please reach out to marketing@royallive.com.