MOSCOW, July 30, 2021 /PRNewswire/ — «Football For Friendship» Euro 2020 News Bureau organizing committee announced 11 best young journalists from 11 UEFA EURO 2020 host cities, intending to join Patrick Schick, the footballer who scored the goal of the tournament in an award ceremony late August. The goal of the tournament is a unique award initiated by Gazprom in the framework of its partnership with European Championship. 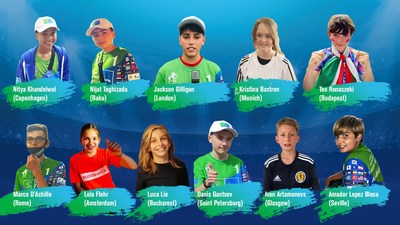 The winners were defined by receiving the highest ranking in each country through the time of their participation in the Program. That included attendance of the Nine Values School classes and completing assignments for the News Bureau from June 11 to July 11th – through the duration of the UEFA EURO 2020 tournament. Each of the 145 participants of the Program attended one match in their home country, six classes, wrote a report on the match, gave a prediction of the goal of the tournament and shared lifehacks on mobile journalism.

The Football for Friendship International Children’s Social Programme was established by Gazprom in 2013 and is aimed at popularizing universal values among young people through football.

Over nine seasons, Football for Friendship has brought together more than 16,000 participants in 211 countries and regions of the world, has received more than 60 awards for social responsibility, sports, and communications, including three Guinness World Records™ for the most multinational football training session in history, the largest online football event, and for the largest number of virtual stadium visitors in the world.