MOSCOW, Oct. 18, 2021 /PRNewswire/ — On 15 October, the first NFT trophy for UEFA EURO 2020 goal of the tournament was awarded. The award was initiated by Gazprom, an official partner of the tournament, and was handed to Czech national football team forward Patrik Schick. Russian calligrafuturism artist Pokras Lampas was invited to design the award. 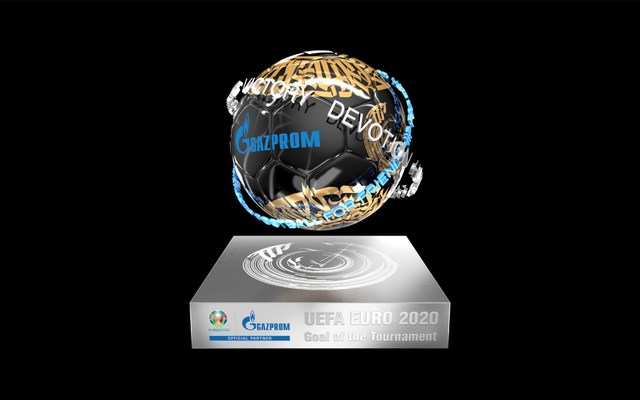 «Gazprom is a modern and technological company. By combining sports, high technology and art, and creating the first sports trophy of this kind, we have drawn a clear parallel with our unique production technology,» Gazprom Department Head and Press Secretary of the Gazprom Management Committee Chairman Sergey Kupriyanov said.

«I found my inspiration in the idea of the project, with the common nine values we share with Gazprom and «Football for Friendship» Programme. These values, as well as football itself, unite people all over the world», said the artist Pokras Lampas.

During the award ceremony, the central fragment of the NFT trophy was presented – a black and gold soccer ball with orbits containing the name of Gazprom’s International Children’s Social Programme «Football for Friendship» and its nine values: friendship, equality, justice, health, peace, loyalty, victory, tradition, and honour. Its hologram is located at the UEFA headquarters in Nyon, Switzerland.

«We welcomed the initiative shown by Gazprom, our long-standing UEFA partner, to bring a fresh outlook on such kinds of awards. Gazprom’s Goal of the Tournament trophy is a unique event in the history of world sports. We look forward to even closer cooperation with Gazprom and realization of new initiatives supporting and developing world football,» – emphasized Guy-Laurent Epstein, UEFA Marketing Director.

«I am very proud to be the first in the history of football to receive this kind of  trophy. To be honest I have never seen something like this before» – said Patrik Schick, the footballer who scored the EURO 2020 goal of the tournament.

In May 2021, UEFA announced that Gazprom would be a sponsor at the 2020 and 2024 UEFA European Championships. The terms of cooperation included the presentation of the award for the best goal scorer at the 2020 Euro, which was designed for the first time as an NFT trophy – a digital non-renewable version of a work of art.

On 11 June, Pokras Lampas created an art installation of 432 soccer balls, which became the physical prototype of the NFT trophy, at Gazprom’s booth at the football village in St. Petersburg during the championship. On 27 June, the prototype of the award was broken down into balls, each of which was covered with a unique calligraphic ornament by the artist. The picturesque balls were digitized, and on the eve of the championship final, on the night of 10–11 July, they appeared on the streets of the 11 cities that hosted the 2020 UEFA European Championship: Amsterdam, Baku, Budapest, Bucharest, Glasgow, Copenhagen, London, Munich, Rome, St. Petersburg, and Seville. Hundreds of thousands of residents and guests of European cities took part in the search for the balls.